It’s a device similar to a breathalyzer in the way it checks your blood alcohol concentration (BAC), but with the key detail that it’s connected to your ignition, preventing you to start the car if your 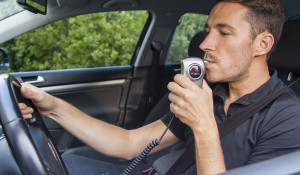 BAC is above the allowed limit. It’s approximately the size of a cell phone and it is connected to the dashboard or another place in the car. IID requires the driver to provide a breath sample before starting the vehicle. Repeated sampling is requested during driving to ensure the alcohol level is the same like in the beginning.

How does IID function?

The driver blows into IID prior to starting the vehicle. The cell inside the IID establishes blood alcohol level (BAC). If the BAC surpasses the limit, the IID doesn’t allow relay to close and it’s impossible to start the car. If the BAC is ok, the relay closes and the driver can start the car.

When the driver had his license suspended as part of the DUI sentence, the state or court may set a time period after which the driver can apply for a restricted driver license. This license can enable the driver to drive to and from work, school, counselling classes or any other predetermined destinations.

It is often the case that a driver can obtain the restricted license if they agree to have IID installed.

If a driver has been deprived of their license as a result of a second, third or subsequent DUI sentence, in many US states the license reinstatement for such a driver will only be possible with the installation of DUI. In some states, the driver will have to prove his corrected behavior by having an IID for a certain period, before being able to have his license reinstated.

State requirements about IID differ. Not every state even requires an IID. However, in the last couple of years the number of states requiring an IID for a restricted or reinstated driver license has increased significantly. If you get a DUI in Los Angeles chances are you will be required to get one.

Is it possible to fool IID?

IID was designed to meet strict security and safety requirements. If you do happen to trick the IID, you risk harsh penalties and exacerbating an already bad situation. Moreover, remember that IID records everything. Plus, there’s also rolling retest which requires the driver to do the test while driving to make sure the BAC situation hasn’t changed since the car was started.

Isn’t it dangerous to do the breath test while driving?

We have mentioned that IID was designed to meet security and safety standards and requirements. After doing the retest whose results came back positive for a BAC higher than allowed, the driver has enough time to pull over. Even if the driver fails to do so, the car will not shut off as that would unavoidably endanger the safety of the driver and the surrounding traffic. But, the test results will be recorded as well as whether the car was stopped.

How much is IID and who pays for it?

It’s almost invariably the driver who was convicted of DUI who incurs the costs of installation and lease of IID. The price is subject to variation across the states. The installation is in the region of $100 and the monthly lease can be between $50 and $100.